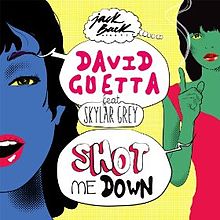 The highly-awaited sixth studio album by record producer David Guetta is almost ready. French deejay is unstoppable on his eagerness to conquer the world producing for major artists, most recently, he has done a good work in the latest albums of pop princess Britney Spears and Lady Gaga.

Now he returns with batteries charged with upcoming new single entitled “Shot Me Down“, a cover of 1966 classic hit single “Bang Bang (My Baby Shot Me Down)” performed by Cher and covered by Nancy Sinatra the same year. The new electronic version has the guest vocals of American singer-songwriter Skylar Grey and it’s scheduled for release on Beatport on January 20, 2014 via Jack Back Records. The radio version of the single was released on iTunes on February 10, 2014.

This song comes after finish promoting his latest single to date “Ain’t a Party“, in collaboration with Glowinthedark included in the compilation “F**k Me, I’m Famous – Ibiza Mix 2013“, and released digitally on July 8, 2013.

In addition, Guetta has yet to officially release in full the buzz track “Voices” with Mikky Ekko, main theme for 2013 World Humanitarian Day campaign entitled “The World Needs More“.