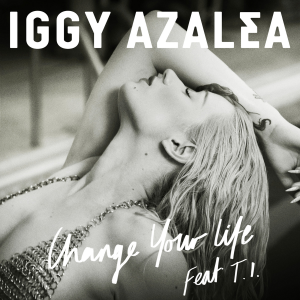 “Change Your Life” is a song recorded by Australian rapper and songwriter Iggy Azalea. After working on her shit with lead worldwide single “Work“, and saking, breaking and making “Bounce” with the second international track, Azalea doesn’t rest for a minute and she’s released another single. This time this new production serves as the second single in the American market and third worldwide. The song has the collaboration of her usual friend, producer and rapper T.I. who had previously worked with her ​​on the promotional single “Murda Bizness” included in her debut EP “Glory.“.

The single produced by The Messengers will be released on digital retailers on 13 October. All songs will be included in her anticipated debut album “The New Classic” to be released on March 2014 through Island Def Jam. The singer unveiled the official artwork on 14 August. The single was exclusively premiered on BBC Radio 1Xtra – MistaJam on 19 August.

The song is all we could expect, urban part, where we enjoyed the dirtiest Iggy and T.I. rapping and a more pop and catchy part and chorus “Imma change your life, Imma change it” reminiscent of the track “Problem” by Becky G, included on the “Hotel Transylvania” soundtrack. Iggy is on a roll, she takes three shots, fucking good!

The music video was premiered on VEVO on September 9. The solo version of the song without T.I. was released on iTunes on October 15th.