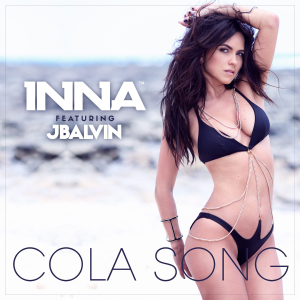 Romanian dance diva INNA is ready to kickstart the summer with brand new single! It’s called ‘Cola Song‘ and has the guest collaboration of Colombian reggaeton artist J Balvin. The song was made for the 2014 FIFA World Cup and it will be released on April 15, 2014.

‘Cola Song‘ was produced by TJR and Axident, and co-written by Breyan Isaac and Andrew Frampton. The music video was directed by John Perez and it was released alongside the song on April 14. About the video INNA said:

I feel that ‘Cola Song’ is one of my sexiest videos. It makes me feel good about myself, full of energy, ready for a long and beautiful summer. I hope all my Club Rockers will enjoy watching it — I know they will dance and have a good time listening to it

This song comes before the release of another single ‘Good Time‘ with Pitbull, which will be officially launched before the summer. The new single uses the sample of Andreas Schuller’s song ‘Piñata 2014‘, also with the guest vocals of INNA.

Both songs will be included on INNA’s upcoming fourth studio album ‘Latinna‘ (stylized as ‘latINNA‘) scheduled for release later this year via Warner Music and Blanco y Negro Music. She unveiled a video teaser ‘#LatINNA‘ on her Youtube channel on April 1st.