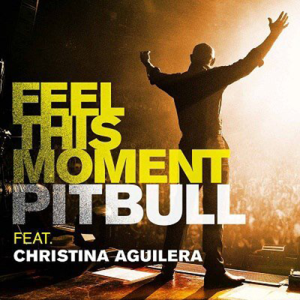 “Feel This Moment” is a song by American rapper Pitbull. The track is confirmed as the fourth official single taken from his seventh studio album “Global Warming” that was released on digital retailers on November 16, 2012 via RCA Records. The song has the collaboration of American recording artist Christina Aguilera. The song was written by Nasri Atweh, Chantal Kreviazuk, Adam Messinger, Nolan Lambroza and Pitbull, while production was handled by Adam Messinger, Sir Nolan, Nasri Tony Atweh and Urales “DJ Buddha” Vargas. The song heavily samples 1985’s hit single “Take on Me” original performed by A-ha and written by Magne Furholmen, Morten Harket and Pål Waaktaar.

The single is scheduled to impact U.S. radio on February 4, 2013. They performed the track for the first time on November 18, 2012 at the American Music Awards ceremony in a medley with the song “Don’t Stop the Party“. The music video was premiered on VEVO on March 15th.