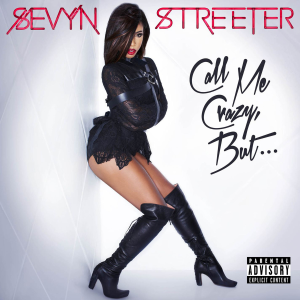 “Call Me Crazy, But…” is the debut EP by American recording artist and singer–songwriter, best known for being a member of the girl groups TG4 and RichGirl, Sevyn Streeter. The extended play was released on digital retailers on December 3, 2013 via Atlantic Records.

It comes preceded by the lead single “It Won’t Stop” with the collaboration of her mentor, American singer and dancer Chris Brown. Alongside the pre-order of the album on iTunes, the singer released two promotional tracks: “Call Me Crazy” and “nEXt” on November 5.

Folling the promotion of the single “nEXt“, the singer premiered the music video for the song “B.A.N.S.” on her Youtube channel on June 25th.

Come On Over
It Won’t Stop (feat. Chris Brown)
Sex on the Ceiling
Call Me Crazy
B.A.N.S.
Shattered
nEXt