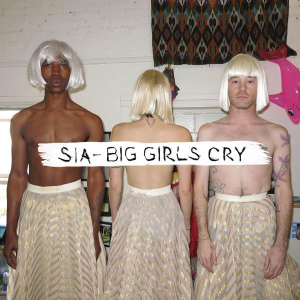 The hitmaker also collaborated on Enimen’s last single “Guts Over Fear“, included on the soundtrack of the film “The Equalizer“, and also featured on Shady Records upcoming compilation album “SHADYXV“.

The song’s intrumental base reminds me to JoJo’s 2004 hit single “Leave (Get Out)“, and that is so good. During and interview with French Virgin radio, Sia confirmed the song as the second official single from the album, whose music video was filmed in September.

The video directed by Daniel Askill and Sebastian Wintero, and includes once again as main character American child dancer, actress, and model Maddie Ziegler. She is best known for her appearances her other music videos, including “Chandelier” and “Elastic Heart“, which was officially released as the second single from the album early 2015.

The full music video directed by Sia and Daniel Askill was finally premiered through Vevo on 2 April 2015. “Big Girls Cry” was confirmed as the next official single in the British market.

Sia confirmed that ‘The Maggie music videos‘ was intended to be a trilogy, so this is the third and last video starring the young dancer.