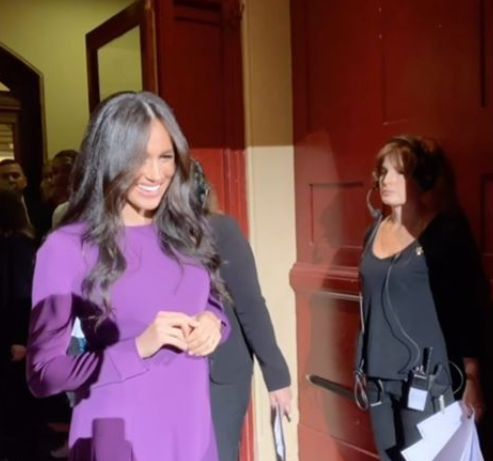 Believe it or not, a woman who could afford to dress differently every day of the year has actually decided to wear something she has worn before. On Tuesday, the young Duchess of Sussex arrived at the Royal Albert Hall in London wearing a royal shade of purple in the form of a Maxwell midi dress she wore while she was pregnant. The popular dress is still available for sale in black, but fans can’t get the signature ‘Acai’ shade that Meghan is rocking.

The dress may look very familiar to people who, for some reason or another, actively follow what Meghan Markle wears throughout the course of her incredible and interesting life. She actually wore this gown back in January when she was casting Birkenhead, except on that occasion she was also wearing a coat over the dress, and the implications of this may not be fully understood by fashion commentators. It was during this time that she announced the due delivery date for her baby.

Now, Markle has decided to rock the gown again while visiting one of her favourite non-profit organisations in Dublin. Recently, she has drawn a lot of attention to herself by speaking about how difficult her life is as a royal woman.

While you might not have thought it, Meghan has candidly said that the public pressure on her has made raising a child ‘a struggle’ and that she felt vulnerable under media scrutiny. Now she seems to be in a more stable place in her life as a royal and a mother.

Surrounded by today’s generation of impactful young leaders, The Duchess of Sussex attended the 10th Annual One Young World Summit Opening Ceremony at the @RoyalAlbertHall in London along with 2,000 young leaders from 190+ countries. This is her third time in attendance as a counsellor for these extraordinary young leaders from around the world, and her first time attending as a member of The Royal Family and Vice President of The @Queens_Commonwealth_Trust. For more information, visit @OneYoungWorld or our previous post to see her support of this organisation in recent years. #OWY2019 Video © SussexRoyal