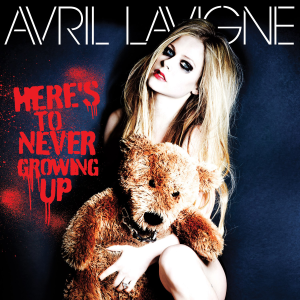 “Here’s to Never Growing Up” is a song by Canadian recording artist Avril Lavigne. It’s confirmed as the lead single from her upcoming fifth studio album, “Avril Lavigne” that’s scheduled for release this September via Epic Records. The track was written by Lavigne, David Hodges, Chad Kroeger, Jacob Kasher and producer of the song Martin Johnson and was released on digital retailers on 9 April 2013.

This new album features producers like: The Runners (“Cheers” by Rihanna, “Swagger Jagger” by Cher Lloyd, “How We Do (Party)” by Rita Ora ), Nickelback’s lead singer Chad Kroger, Marilyn Manson, Ex-member of Evanescene David Hodges (“Because of You” by Kelly Clarkson) and Alex Delicata (Guitars for “California King Bed” by Rihanna). She’ll be performing the new single for the first time on TV at The Juno’s on April 21st. The single is scheduled for release in British market on June 2nd, 2013.

Lavigne began shooting the music video for the song in early April. She confirmed that her ex-bandmates Evan Taubenfeld and Devin Bronson will appear in the video, and it will be set at a senior prom. The video directed by Robert Hales was premiered on VEVO on May 9.

About the song, Avril never disappoint me, although I have to admit that after hearing the first audio teaser of the single, I thought it would be a pretty boring song, I was wrong. The song is the classic production which has from the first note Lavigne seal. Although it’s a fairly generic song and sounds a bit like 2002 (“Complicated“), it’s a hymn to youth and freedom, an ode to the Peter Pan syndrome with a piano pop melody, easy and highly catchy lyrics and a perfect chorus with “ooooohh ooooohhhh (Here’s to never growing up)“. All of this make the song pure pop perfection. With its 28 years, Avril Lavigne is shown that her style is unique and can continue singing like a teenager and it perfectly works. This song isn’t as effective as “What the Hell” (2011), an instant hit, but I’m convinced it will be a grower.