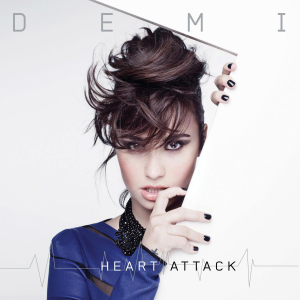 “Heart Attack” (previously known as “Pieces of a Heart“) is a song recorded by American singer, actress and judge of latest season of The X Factor USA, Demi Lovato. The track written by herself with the collaboration of Mitch Allan, Jason Evigan, Sean Douglas and Nikki Williams is confirmed as the first official single taken from her upcoming fourth studio album “Demi” that will arrive in stores around May through Hollywood Records.

The track produced by theSUSPEX (Mitch Allan & Jason Evigan) was released on digital retailers on February 25th, 2013. The singer unveiled the release date alongside the single artwork in all of her social networks on 12 February, as part of her “big announcement“. The up-tempo track that is described as “a celebration of life and love” was exclusively premiered the same day on “On Air with Ryan Seacrest“. The music video directed by Chris Applebaum was filmed in early March and it was exclusively premiered on Entertainment Tonight on April 9th and posted on VEVO immediately after.

“For a while, I could tell that, when people would talk to me, they knew my story. I think I’ve opened up more on this album. My life began to evolve, and I started to grow. These are songs about the celebration of life and how rewarding it can be. This is what this album is about”

The “Dubstep Breakdown” Version was made using the official instrumental from the demo recorded by Nikki Williams.