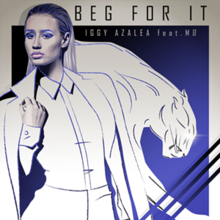 Iggy Azalea continues slaying the music world with her global smash single ‘Fancy‘ featuring Charli XCX and Rita Ora’s collaboration with “Black Widow”. Is without doubt, the Azaleans year. But, we are ready to enjoy more new music from the Aussie female rapper. She confirmed next single and it’s called “Beg For It“.

The song was written in collaboration with Charli XCX and it has the guest vocals of Danish rising star MØ, who recently also collaborated on Elliphant’s new single “One More“. Iggy performed the single live for the first time on Saturday Night Live on October 25th.

“Beg For It” also serves as the first single taken from the re-issue of her acclaimed debut album “The New Classic“, re-titled “Reclassified“. This new version of the album was released on November 24th.

The music video was scheduled to be recorded in December, and directed by David LaChapelle, but it was finally canceled by the limited impact of the song in the charts. The single received its first play during BBC Radio 1’s Elvis Duran and the Morning Show on Friday October 24th.

“Beg For It” is brimming with Iggy’s signature double-time flow, rauchhaus bassline and an infectious vocal hook from MØ. It’s a clear “Fancy” reloaded.