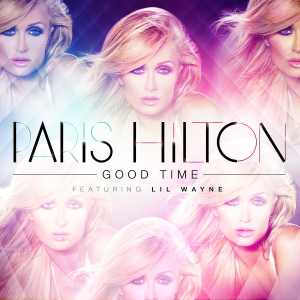 Our favorite heiress seems she has finally decided to start promoting her more than advertised and anticipated new album after the success with the debut “Paris“, published in 2006. In early July, following the announcement of her weekly residency as a DJ at Amnesia, one of the most famous clubs in Ibiza, the most famous blonde socialité Paris Hilton recorded the music video directed by Hannah Lux Davis of what will be the first official single entitled “Good Time“.

The track produced by Afrojack is confirmed as the lead single taken from her sophomore album, still untitled, but is planned to be released later this year through her new label Cash Money Records. The single has the collaboration of American rappers Lil Wayne. It was released on iTunes on October 8th alongside the exclusive premiere of the music video directed by Hannah Lux Davis via Rolling Stone. The video was posted on VEVO later the same day.