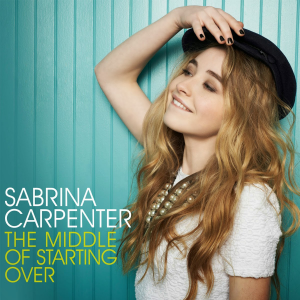 American teen actress and singer Sabrina Carpenter continues in full promotion of her debut EP “Can’t Blame a Girl for Trying“, released on digital retailers on April 8, 2014 via Hollywood Records.

Following the promotion of the EP’s title track “Can’t Blame a Girl for Trying“, the singer has ready the next one. The second official single is the track “The Middle of Starting Over“. It was written by Jim McGorman, Robb Vallier and Michelle Moyer.

Her sound reminds me a perfect mix between Taylor Swift and Colbie Caillat. She’s currently working on her highly-anticipated full length album, scheduled to be released in 2015.

The new single impacted Radio Disney in June and the lyric video was premiered on VEVO on August 19th.

The official music video directed by The Young Astronauts was premiered on Disney Channel on Sunday September 21 and posted on VEVO right after.