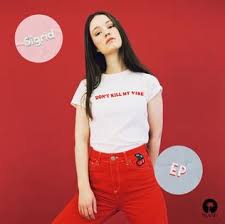 Sigrid Solbakk is a Norwegian emerging singer-songwriter based in Ålesund who has delivered her proper major debut single and it’s an instant certified bop!

The song is called “Don’t Kill My Vibe” and it’s a lovely synthpop moment and confirmed as the first taste of her upcoming debut EP, expected to be released sometime this year via Island Records and Universal Music.

It was written by Sigrid herself along Martin Sjølie, who is also responsible for the production. The result sounds like a perfect mix between Elliphant and MØ.

“Don’t Kill My Vibe” was launched on digital retailers and streaming services on February 10th. A special acoustic version of the single was released on March 3rd.

The official music video, which was directed by J.A.C.K., was finally premiered through Vevo on Friday, March 31st. A special remix made by American producer/deejay Gryffin was launched on April 7th.

A proper debut extended play with the same name of the single including the previously released songs plus new track “Fake Friends” was launched on May 5th.