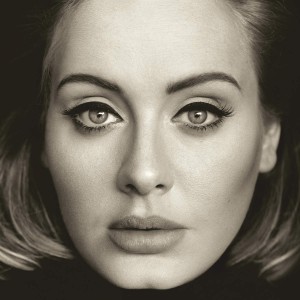 The most famous English singer and the real queen of sales Adele has finally impacted the music world again with her more than anticipated and awaited new album “25“, which was finally released on November 20th via XL and Columbia Records.

After an incredible time with amazing numbers and indisputable successes, she has a difficult role: get beyond, or stay successful! Remember, the success of her second studio album entitled “21” earned numerous mentions in the Guinness World Records.

She was the first artist to sell more than 3 million copies of an album in a year in the UK.
With her two albums and the first two singles from 21, ‘Rolling in the Deep’ and ‘Someone Like You’, she became the first living artist to achieve the feat of having two top-five hits in both the UK Official Singles Chart and the Official Albums Chart simultaneously since The Beatles in 1964.
‘Set Fire to the Rain’, became her third number one single in the US, Adele became the first artist in history to lead the Billboard 200 concurrently with three Billboard Hot 100 number-ones.
Adele was the first female in the history of the Billboard Hot 100 to have three singles in the top 10 at the same time as a lead artist, and the first female artist to have two albums in the top five of the Billboard 200 and two singles in the top five of the Billboard Hot 100 simultaneously.
’21’ was the longest running number one album by a female solo artist on the UK and US Albums Chart.
In 2011 and 2012, Billboard named Adele Artist of the Year.
In 2012, Adele was listed at number five on VH1’s 100 Greatest Women in Music, and the American magazine Time named Adele one of the most influential people in the world.
In 2013, she received an Academy Award as well as the Golden Globe Award for Best Original Song for her song ‘Skyfall’, written for Skyfall, the twenty-third James Bond film.
Adele’s 2011 set “21” has over sold 11.1 million copies (13.5m+ with TEA) in the U.S. thus far, and more than 30m worldwide
Shocked, right? I think it’s hard to beat.

Anyway, after a break of almost four years, where the singer has had her first child, the promotion of this new album has started, and as expected, following the dynamics of her previous studio albums, the name of the album corresponds to the current age of the artist.

Among the producers on this new project include: Paul Epworth and Greg Kurstin, who worked with the singer in her previous release. According sources closer to the production team: “The new music will shock some people. It’s very different but with a voice like that, she can do anything“.

HitsDailyDouble revealed that the English superstar inked a lockout deal with NBC for four big TV looks, including The Today Show, SNL, a dedicated special and one more appearance TBA (possibly Fallon). The exclusive deal will not, however, prevent Adele from appearing on the 2016 Grammys.

The singer revealed official letter talking about the new album on October 21st. She said: “25 is about to getting to know who I’ve become whithout releasing“.

The first official single “Hello“, received its first play on October 23rd and it was released with the pre-order of the album on iTunes right after.

Apparently, ADELE released the track “When We Were Young” as the second promotional single from the album on November 17th with a special live version of the track live from The Church Studios.

How to find a good essential oils supplier