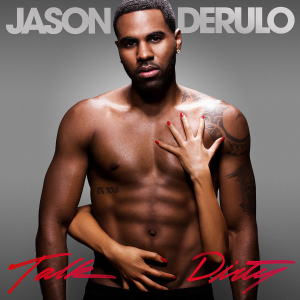 After the success achieved with his smash 2 Chainz-assisted single ‘Talk Dirty‘, and after premiering the videos of the next official singles ‘Trumpets‘ and ‘Stupid Love‘, American singer-songwriter and dancer Jason Derülo is ready to add them to his anticipated album for the American market.

During an interview with Power 106 on iKts ‘Valentine’s Crush‘ concert in Los Angeles, Derulo confirmed that the full-length U.S. version of his third international studio album ‘Tattoos‘ is called ‘Talk Dirty‘ and serves as the follow-up to his last year’s EP ‘Tattoos‘. The new album was released on digital retailers in the USA on April 15, 2014 via Beluga Heights and Warner Bros.

Alongside the pre-order of the album on iTunes, Derulo released the track ‘Vertigo‘ featuring his girlfriend, American singer Jordin Sparks as iTunes countdown single on March 17, 2014. The track was also included on the international version of the album ‘Tattoos‘.