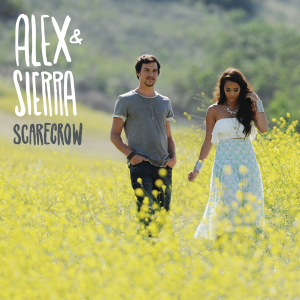 They become popular after winning the third and final season of The X Factor USA last year with the Christmas song ‘All I Want for Christmas Is You‘. Alex & Sierra were mentored by Simon Cowell and became the first and only group to win the American version of the show.

They are currently promoting their debut studio album “It’s About Us“, scheduled to be released on October 7, 2014 this year via Syco Records. The lead single is called ‘Scarecrow‘. The song produced by Martin Johnson was premiered alongside the official lyric video on Tuesday May 27th.

‘Scarecrow‘ was written by Alex Kinsey, Martin Johnson, Sierra Deaton and Sam Hollander. It was released on iTunes on June 23. The music video directed by Philip Andelman was filmed in early-May and it was premiered on VEVO on July 11th.

The duo performed an acoustic rendition of its debut single on Perez Hilton. The video was premiered on October 1st.