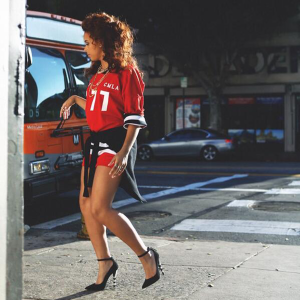 American singer-songwriter Alexis Jordanis is back to bring back ‘Happiness‘ in our lifes. The singer has everything ready to start promoting her highly-awaited new single “Gone“. It’s confirmed as the lead single taken from her second studio album, still untitled, scheduled for release in 2014 via Roc Nation and Columbia Records.

The track written by Jordan and Blue serves as the follow-up to her latest and buzz single “Acid Rain“, released on January 15, 2013 where she samples Bingo Players’ hit song “Rattle“, and was written by Sia Furler and produced by Stargate. Since then little or nothing was known about her music.

On December 27th, she finally confirmed via Twitter that her new single is on the way. “Gone” was released on February 28, 2014, along with the official video directed by Mel N Muse.