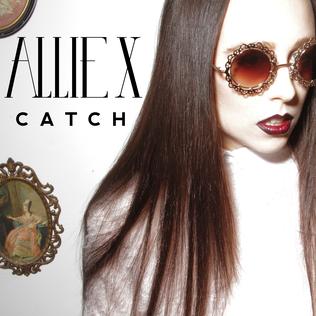 ‘When was the first time you felt X?‘ Keep calm! We’re not talking about Kylie Minogue or Chris Brown’s next album.

This is the beginning of the musical journey of Allison Alexandra, better known as Allie X. She’s a Canadian songstress based in Los Angeles, who’s ready to bring back the good power-pop to our lives. Allie signed a record deal with Neon Gold Records, a label whose mission is to find real talent, among its previous findings, Ellie Goulding, HAIM, Foxes, Icona Pop, or Marina and the Diamonds. Too much!

She’s currently working in the studio shaping her debut album which will arrive later this year. The first and debut single is called ‘Catch‘ and it brings all the propulsion and promise of springtime in a accurate shot of sonically potent power-pop.

From the knock and boom of the lights-out beat to the diaphanous layers of synth that sparkle and wail under the fluid, hook-savvy topline, Allie X hits the perfect halfway point between CHVRCHES’ vocalist Lauren Mayberry, and Charli XCX with this, her sick debut offering. So far, one of the best songs presented during this year.

An artist under-the-radar that will soon become the limelight. ‘Catch‘ was released on digital retailers on March 3, 2014. Press play and let yourself be marked by X.