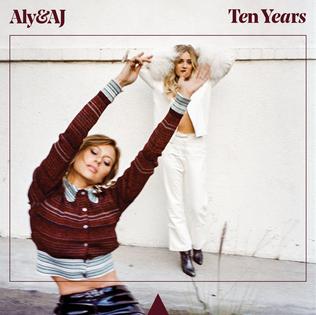 The not-yet-confirmed-titled and highly awaited next music project by American pop duo Aly & AJ, formed by Michalka sisters is on its way but quite lost.

In late 2013, their manager confirmed that they, when were 78violet, were finalizing the tracklist for this awaited music project, which is expected to be released in the distant future.

This utopic project will mark their first official musical release as a duo since 2007’s “Insomniatic” and the first after breaking the record deal with Hollywood Records and become independent artists.

The girls presented the track “Hothouse“ as the first official single from this new era, which was released on digital retailers on July 8, 2013. Since then, nothing.

Some of the songs recorded for the album as 78violet were leaked online in 2016. Since then, the girls returned as their original band name Aly & AJ and continues to work on this project.

During an interview with Entertainment Tonight, the girls have confirmed that this new album is coming early next year and so far they have recorded 7 new songs and they are ready to start a new tour including some re-worked versions of their classic pop gems like “Chemical Reacts“. Aly & AJ also confirmed that some of the tracks recorded as 78violet will be also included on the tracklist.

During a recent interview with Just Jared Jr., the duo has confirmed they are planning to release and three-piece EP. They said:

We’re kind of writing three records and making one. It’s always smarter to write more material than needed so that all you have to do is narrow it down afterwards. We’d probably want to make a 10 song record but I think our plan is to find three songs we absolutely love and get those out first

Our release date had to be pushed due to AJ filming a movie BUT good news is….There’s an EP on the horizon & it’ll all be worth the wait https://t.co/ex6LVwcaoP