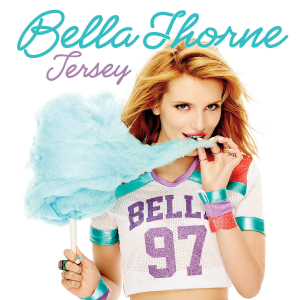 Bella Thorne “Jersey” (iTunes+)
Disney Channel is launching a new wave of artists. It’s time for Bella Thorne. The American actress, dancer, model and singer best known for her role as the aspiring young dancer CeCe Jones on the Disney Channel original series ‘Shake It Up‘, impacts the music world with her debut EP, “Jersey“, released on digital retailers on November 17, 2014.

The lead single was the album’s title track “Call It Whatever“, released on May 17th. About the EP, she said:

Everything is very different so it is hard to say I have some Coachella music, I have some R&B, some more Ke$ha talk-y music. I wanted there to be a song for everyone I don’t want it to just be you hear a song on the radio and say, ‘Oh that kinda sounds like Bella Thorne,’ like she would sing a song like that. I want it to be so versatile and different

Thorne also confirmed she’s working on a full length album produced by Alex Cantrell and Bobby Brakens, scheduled to be released in 2015. It will be eleven songs plus two more on the deluxe edition.