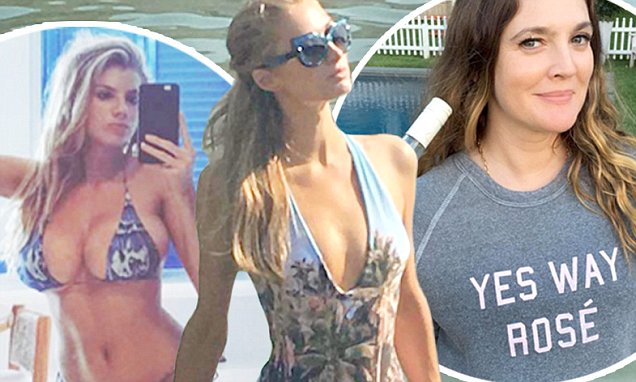 She got famous after she got a staring role in the 2017 Baywatch feature film. She showed off her amazing body at the Kelly Gale X PrettyLittleThing showing at the Sunset Towers in LA. The 26-year-old actress showed off all of her fabulous assets from within a black bralet that also served to draw attention to her perfect abdominals.

The outfit was accented with white stilettos and a white bag that was naturally loaded with her belongings that she would use at some point or another on her night out. She might put on sunglasses, or she might reapply her lipstick – we can only sit here and guess!

She put her hair in a lovely chic bun but left a few strands loose to frame her stunning facial features which were highlighted with a soft layer of makeup. The outfit was layered with a cropped jacket, which was paired with a mini skirt that has lovely bottom detailing.

While that was happening, Paris Hilton wore an entirely black outfit with a mini dress that was adorned with gems that sparkled in the moonlight. She paired the outfit with a leather jacket and some heeled boots as well as some cat-eye sunglasses. She wore her hair in a high ponytail with some light makeup touches to boot.

Paris has been having a hard time lately since her Grandfather passed away at the age of 91 back in August. She said, ‘It’s been really hard, we were so close.’ She also added that he acted as a mentor to her and was ‘such a legend,’ and that she wants to continue his legacy.