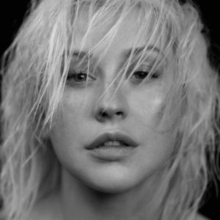 Stop the world right now! The voice of our generation, the one and only Legentina is coming back to slay hard next year.

The Voice coach Christina Aguilera slayed Internet again to share a new photo in the STUDIO, recording a song with a hat, a Pharrell Williams’ hat back in 2015, first prelude that she had returned to work.

During Easter last year, she slayed all her fans (again) confirming she worked on the horizon with ‘album, baby, and beautiful music‘. Christina had her second child with American musician and film producer Matthew Rutler in August 2015.

This expected new album later will be available definitely sometime next year (2017) and comes almost five years after her last offering, “Lotus“, which she only properly promoted the lead single “Your Body“. Queen of promotional longevity.

According the production duo Da Internz, the album goes “Caviar Ratchet“, whatever that mean. Pure and expensive. They added:

During an interview with ExtraTV, Christina confirmed that she worked with her fellow The Voice’s coach Pharrell in some music. She said:

It’s genuine and it’s heartfelt and I’m very excited to pour my heart out into this record fully, I’ve been gathering and writing and coming up with these amazing ideas for different parts of how I was feeling the past year, so I’m really excited to vocalize all of it and make it all come together

The singer performed a majestic New York City-tribute with the guest appearance of American rapper Nas during 2015 NBA All-Star Game on 15 February 2015.

During an interview with TODAY Show, Christina confirmed she worked in two new albums one in English and one in Spanish. She said:

I’ve been loosely working and sort of accumulating ideas for what my next album will be over the last couple of years. I’m excited for my fans to finally be getting something from me — it’s been a while!

During an interview with Wonderwall, the Bionic diva confirmed she worked in some new music with Linda Perry. She said:

During an interview with The Hollywood Reporter, Christina has confirmed she plans to release new music later this year and she wants to collaborate with people she has never worked before. She said:

I’ve been loosely working on it the last couple of years. But I really started toward the middle and end of last year to really buckle down and meet with new collaborators and producers, people I want to work with and people I have never worked with before. I can’t say much about it yet because I want to wait until it’s good and ready. I am working on it and will be ready when it can be the authentic masterpiece that it deserves to be. But later this year, most likely

“Ex’s & Oh’s” hitmaker Elle King has confirmed he has been working with Christina in some music for this new project. Xtina confirmed she’s planning to release some new music and get back to her artist side right after The Voice.

During an interview with The Ellen Show, Christina has confirmed that her new album will arrive by the end of the year. During an episode of The Voice, Lotus queen performed a tribute to Whitney Houston along her hologram. The rehearsal tape surfaced online on May 19th after that the performance was canceled and it wasn’t aired on TV.