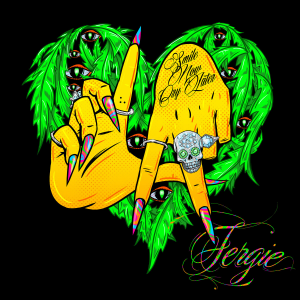 The world must be ready for this! The Dutchess of pop, the one and only Fergie is back to the music world with highly-awaited new solo single officially called “L.A.LOVE (la la)“.

The song produced by DJ Mustard marks her return four years after the release of The Black Eyed Peas’ latest album “The Beginning” and just when her debut studio album “The Dutchess” turns eigth years since its release.

This new song is confirmed as the lead single taken from her second solo album, rumored to be called “Smile Now, Cry Later“, scheduled to be released in the first quarter of 2015 via Interscope Records.

“L.A.LOVE (la la)” was written by Fergie with the collaboration of Dijon McFarlane (DJ Mustard), Shomari Wilson, Royce Thomas and Theron Thomas. It impacted American radios on September 29th, the same day it was officially released on iTunes.

The music video, directed by Rich Lee, was filmed in Saturday October 18th. It shows Fergie Ferg and American rapper YG boarded a tricked-out party bus and traveled through the streets of L.A., which features cameos from Chelsea Handler, Koda Kumi, Wilmer Valderrama, Taylor Momesen, Kelly Osbourne and many more.

It was premiered exclusively on Yahoo! Music and VEVO on Monday November 10th.

Loreen “I’m In It with You” (Moraeus med mera Performance)
Sia “This Is Acting” | New tracks: “Black & Blue” / “Life Jacket”