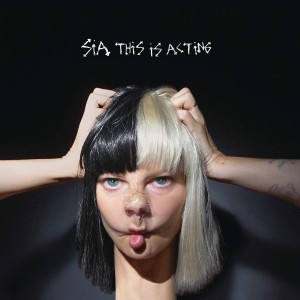 “This Is Acting” is the seventh studio album by Australian hitmaker Sia. It was released on digital retailers on January 29, 2016 via RCA Records.

This album arrives after the global impact achieved with her album “1000 Forms of Fear” (2014), project highly acclaimed by critics and public, if only she duly promoted one and hit single “Chandelier“, and the second promotional track “Elastic Heart”.

The album’s title was revealed during an intervie with NME, She said:

I’m super productive. I have a full album ready to go and it’s much more pop. I’m calling it ‘This Is Acting’ because they are songs I was writing for other people, so I didn’t go in thinking ‘this is something I would say’. It’s more like play-acting. It’s fun

The first official single is called “Alive” was released on September 25th. According Beats 1, Sia has been working in the studio with FKA twigs. The singer has confirmed during an interview with KIIS FM and On Air with Ryan Seacrest that she has rejected songs from a lot of big international acts.

During a recent interview with Rolling Stone, Sia confirmed two new album tracks called “Reaper“, written with Kanye for Rihanna; and “Cheap Thrills“, written with Greg Kurstin for Rihanna, which was released as instant grat on December 18th.

Fergie “L.A.LOVE (la la)” [Video Premiere]
Lena Katina “This Is Who I Am” | Available on iTunes!