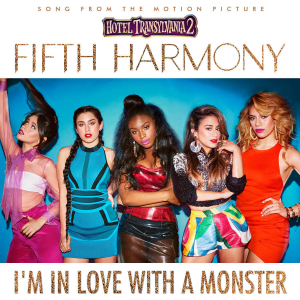 Get ready! The girls of Fifth Harmony are ready to impact the music scene with another new single called “I’m In Love With a Monster“.

The track is confirmed as the main them of the upcoming Sony Pictures Animation’s Hotel Transylvania 2. The sequel to the monster hit Hotel Transylvania (2012), which took in over $350 million worldwide, will be released in theaters on September 25.

“I’m In Love With a Monster” produced by Harmony Samuels and written by Harmony Samuels, Carmen Reece, Sarah Mancuso, Edgar Etienne, and Ericka Coulter; will be heard in the film as well as in the new trailer, which launches this week.

The song with a highly-inpired style by Fergie’s original song “Here I Come“, was finally released on digital retailers (US) on August 14th.

The single was written by Harmony Samuels, Carmen Reece, Sarah Mancuso, Edgar Etienne and Ericka Coulter. It was produced by Samuels.

The music video directed by Matt Stawski was premiered through Vevo on August 27th.