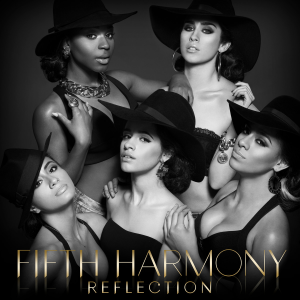 “Reflection” is the debut studio album by American girl band Fifth Harmony. It was released on digital retailers on February 3, 2015 via Epic and Syco Records.

The album comes preceded by the smash lead single “BO$$“, released on July 7th. The girls unlocked the official artwork via a viral campaign alongside Tweetmatic.

MTV First exclusively premiered brand new track called “Them Girls Be Like” on August 23rd. The second official single taken from the album is “Sledgehammer“, released on digital retailers on October 29th.

The girls released the track “Worth It“ featuring Kid Ink, as countdown single on iTunes on January 21, and later was released as the third official single from the album.

The song “Like Mariah” uses the sample of Mariah Carey’s 1996 classic “Always Be My Baby“.

Rebecca Ferguson chooses ‘All That I’ve Got’ as next single!
Nick Jonas “Nick Jonas X2” | Available on iTunes!