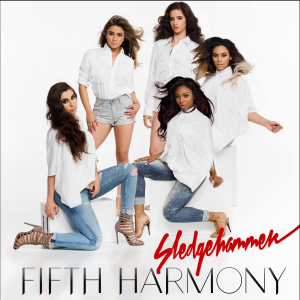 The world must be ready! The girls of Fifth Harmony are finally back with brand new single called “Sledgehammer“.

After achieved significant success with their Michelle Obama-anthem “BO$$“, the girls confirmed the awaited new single during a live stream on Thursday October 23rd. Right after the single was played in some American radios.

The track is confirmed as the second official single taken from their highly-anticipated debut studio album “Reflection“, released on digital retailers on February 3, 2015 via Syco and Epic Records.

The new single is quite good, mixing pop and dance, showing a far mainstream side. A powerful pop production, catchy and radio friendly, real instant bop. The girls strike back better than ever, and we could not be more excited.

In addition, Fifth Harmony have also released the video for the song “Anything Is Possible“, their collaboration with Barbie. They are unstoppable!

“Sledgehammer” was written by the one and only “All About That Bass” hitmaker Meghan Trainor, with the collaboration of Jonas Jeber, and Sean Douglas. It was released alongside the pre-order of the album on iTunes on Wednesday October 29th.

The music video directed by Fatima Robinson was premiered on Vevo on Tuesday November 25th.