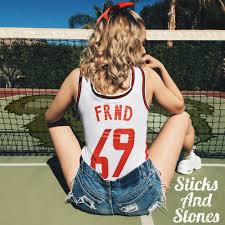 After the huge impact achieved with his proper debut single “Friend”, the enigmatic producer FRND (pronounced Friend) is back with the awaited follow-up.

The song is called “Sticks and Stones” and it’s an exquisite electronic piece with some influences from pop and R&B music with a sensual and ripped vocals and a sick drop. About the song, he shared:

It’s about ending a relationship but the more you try to move on, the more you can’t forget. You go through the motions of shutting someone out but they are still that one pSerson you can’t let go of

FRND recently signing with management company Milton Archer, the team behind Matoma and The Aston Shuffle, and it’s currently working on his first EP, expected to be released sometime next year via Crooked Paintings.

“Sticks and Stones” was launched on digital retailers and streaming services on November 11th.

Hedley “Anything” (Video Premiere)
Maroon 5 Chooses “Love Somebody” As Next Single!