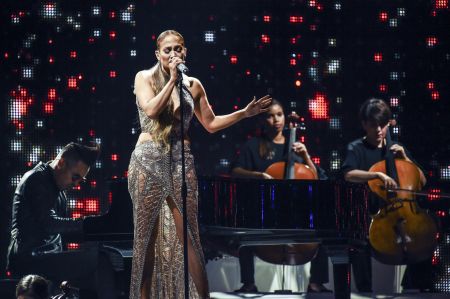 American multifaceted artist, the one and only Jennifer Lopez is ready to bring some new music to our lives. She has been working on two new “secret” music projects, a Christmas album and another Spanish-language LP which is expected to launch in 2017.

Back in 2015, She worked in the studio to record a few new tracks with Rodney Jerkins. During an interview with Access Hollywood at the presentation of the 14th edition of American Idol, the singer confirmed that she dined with Meghan Trainor and talked about working together.

In May 2015, Lopez announced her Las Vegas residency concert show “All I Have” which started on January 20, 2016; the first of twenty initial dates. It took place at Planet Hollywood’s The AXIS theater (same as Britney’s “Piece of Me“)

Jason Derulo confirmed that worked with JLo in some tracks, one of them is his current Caribbean-infused single “Try Me“, included on Derulo’s album “Everything Is 4“, released in May 29, 2015.

During an interview with BuzzFeed, Ne-Yo revealed he worked with her in the studio. He said:

I was actually kickin’ with JLo talking about some music that we’re gonna put together, and we were talking about great directors. She said she really really liked Mary J. Blige’s “No More Drama” music video and was wondering who directed it, so yeah, I looked it up!

Production team The Monsters also confirmed that they worked with JLo. They are also responsible of Rita Ora’s latest single to date, the Chris Brown-assisted “Body On Me“.

Lopez debuted an alleged remix of her new single called “Breaking Me Down” during iHeartRadio Music Festival afterparty at Chateau Nightclub in Las Vegas on Saturday, September 19th. You can hear a snippet below.