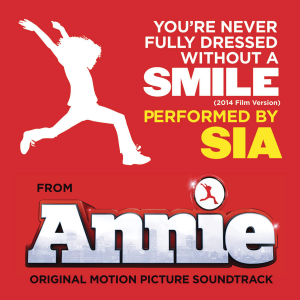 A lot of new music from Sia is ready to impact the music world. She has worked on a three readaptations songs for the upcoming remake of American musical comedy-drama film “Annie“.

The film is directed by Will Gluck and produced by Jay-Z and Will Smith. It stars Quvenzhané Wallis in the title role and Jamie Foxx in the role of Will Stacks, an update of the character Daddy Warbucks. It’s a contemporary adaptation of the musical of the same name, which in turn is based upon the 1924 comic strip “Little Orphan Annie” by Harold Gray.

This becomes the third film adaptation following Columbia Pictures’ 1982 theatrical film and Disney’s 1999 made-for-television film. The soundtrack is scheduled to be released by Roc Nation Records and Madison Gate Records on November 17, 2014.

The first promotional single is the re-worked version of the classic “You’re Never Fully Dressed Without a Smile“, performed by Sia. She gets it again and created an updated wonder. Brilliant.

The entire song has been reworked, from the lyrics to the melody and it’s become something totally brand new. It was released on digital retailers on October 22nd.