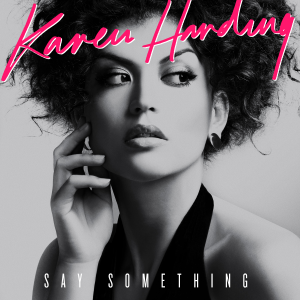 Karen Harding is a 22 years-old singer-songwriter based in Newcastle. She is ready to conquer the world and carry out her mission: “to bring vocals back to the forefront of house music“. She said:

I want to bring what Whitney Houston brought to ’80s and ’90s R&B to house. I’m all about the vocals and bringing back really cool harmonies and strong ad-libs that people can get excited about. But most of all I want people to enjoy themselves

Interesting. After posting a series of covers online, she signed a record deal with Method Records and began work with her debut studio album, scheduled to be released in 2015. It’s without doubt, a promising new face and voice onto the British market and even the international music scene.

She has been worked in the studio with fast-rising producer MNEK, and the first result is the hipnotic debut single “Say Something“. On the creation of the song, she said:

He got in touch and invited me down to London for a session that was due to start at 4pm. But when I was halfway down on the train, just past York, he called to cancel as something had come up. I told him you can’t cancel on me, I’m on my way! So we only had 2 hours but ‘Say Something’ came out of that session

The track marries Karen’s first love – classic female-fronted R&B – with a UK garage/Deep house flavour, bold beats propelling her powerful vocals skyward. The single is a statement of intent, a command to get on the dancefloor and show what you’re made of.

“Say Something” was released on iTunes (UK) on on January 1, 2015. The music video directed by Carly Cussen was premiered on Vevo on Tuesday September 30th.

The singer also released a EP with the single including brand new track “Those Girls” and three remixes. The lyric video of the new track directed by Sophia Ray was premiered on Vevo on 6 February 2015.

The song was written by Harding, Daniel Traynor, Tom Aspaul, and produced by Matt Frost and Grades.