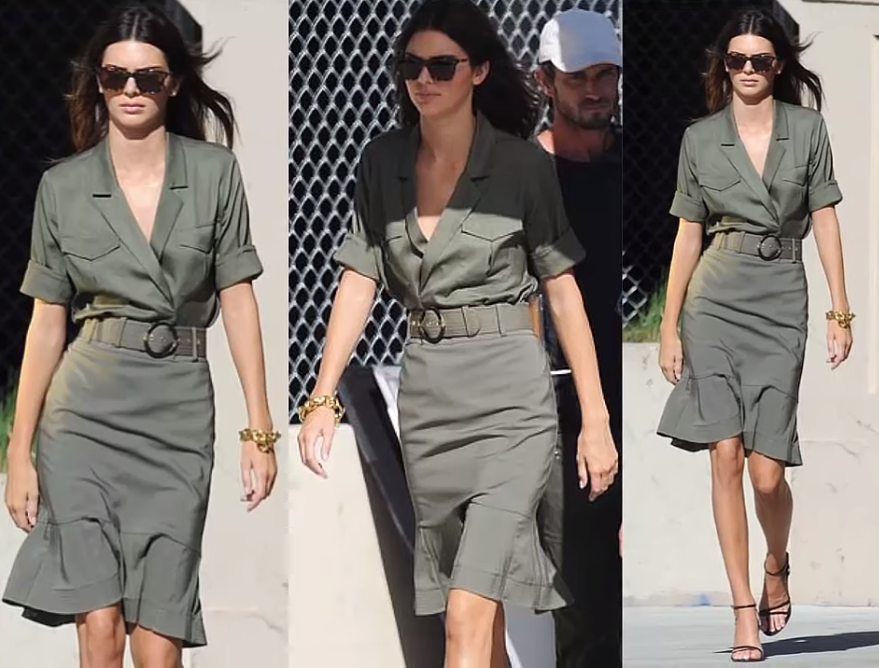 Kendall Jenner, daughter of Caitlyn Jenner (formerly Bruce Jenner), has to jet-set around the world all the time for her time-consuming modelling career. But she recently had a gig back in Los Angeles, her hometown, where she was shooting an ad for Calvin Klein.

She definitely gave off a chic 1940’s vibe with her green wrap around dress that had fold up sleeves and lapels. She is just about to celebrate turning 24 on November 3rd.

She accessorised with a cute belt that hugged her incredible waistline, a shiny bracelet and finally some tortoiseshell sunglasses. Kendall was sweeping hair out of her face as she hid from the sun under an umbrella during the shoot.

She was recently featured in an ad for Giambattista Valli in a partnership with H&M with lots of other celebrities. They filmed the ad in Rome in an old castle and it was all very fancy.

Kendall also recently did an Instagram plug with her sister Kylie Jenner who is 2 years younger. She also went viral when she appeared in a video singing a lullaby to her daughter.

Kendall Jenner and the rest of her family are unique in that their fame is derived from ‘being famous’ and having a stereotypically glamorous lifestyle. She and her sister are often, probably unfairly, targeted as examples of toxic consumer culture that’s obsessed with beauty at any cost.

She has likely dealt with a lot of mental stress being in the limelight and also having to deal with her father’s widely publicised sex change operation.