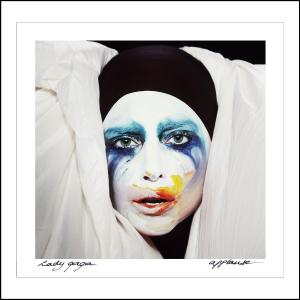 Mother Monster aka Lady Gaga is back triumphant with new single “Applause“. The track produced by DJ White Shadow is confirmed as the lead single taken from her highly-anticipated third studio album “ARTPOP” that’s scheduled for release on November 11, 2013 via Interscope. The title of the single was confirmed via Tara Savelo on Gaga’s social network Little Monsters. Savelo is a make up artist from Los Angeles and she’s currently working for HAUS of GAGA.

The official artwork was exclusively unveiled on Women’s Wear Daily on July 28 and the photo was taken by Inez van Lamsweerde and Vinoodh Matadin, the photograph is colorful, emotional and theatrical, capturing Gaga with a Pierrot-esque face, her rainbow of makeup artfully smeared and her hair covered under a head wrap. The music video was also directed by Inez+Vinoodh and was premiered on Good Morning America and VEVO on 19 August. The video inspired by great painters and artists such as Abramović, Botticelli, Leonardo Da Vinci, Warhol and Meret Oppenheim, is certainly a visual delirium. A perfect blend between art, fantasy, magic and visual power, where Gaga once again, has not left anyone indifferent. The high concept world of “The Fame Monster” is back in “Applause” and to a certain extent the Steven Klein-fragance commercial for “The Fame“. She’s the only one who knows how to exploit a concept to the extreme intensity, and captured it in a incomprehensible music video. No doubt, she’s a crazy pop genius.

Gaga chose the cover image from the video shoot because she thought it showed a different side of her performance, a vulnerable part that the public doesn’t often see. The track was premiered on iHeartRadio on 12 August. Before a hacker leaks the song, Gaga and her team decided to move the premiere and the release of the single on iTunes. Scheduled for August 19, finally the song alongside to the pre-order of the album was released on August 13.

About the song, I was pleasantly surprised. A very accomplished pop/EDM production and with a very catchy melody and lyrics. With easy: “I live for the applause plause plause“. DJ White Shadow has evolved Gaga’s sound, moving away from unnecessary noise in most productions of her lastest album “Born This Way“. This time, Gaga returns with something that sounds pretty cool and fresh. What I disliked is her voice in the two verses of the song, but it saves through the chorus. Once again, the singer has sin of haughtiness, as she did with “Born This Way“, saying that the song “would revolutionize pop muic“. The song is okay, but it’s close to the line of “filler song” instead of immediate music revolution.
Lady Gaga – Applause (Metal Version) [2013]
On 17 August, Gaga shared the instrumental metal version of the song made by a fan. The vocal version was premiered later the same day. In this version, the song takes a much harsher tone. A very accomplished version and making a nod to her great song “Heavy Metal Lover“.