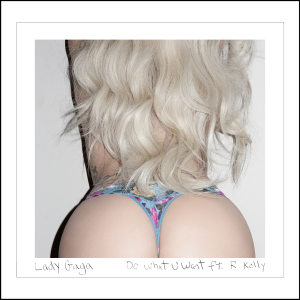 “Do What U Want” is a song recorded by American singer-songwriter Lady Gaga. The track produced by DJ White Shadow is confirmed as the first countdown promo second official single taken from her third studio album “ARTPOP“, released on November 11, 2013 via Streamline and Interscope Records.

The song has the guest vocals of American singer-songwriter and record producer R. Kelly and it was released on iTunes (US) on Monday October 21 and worldwide one day after. The song also features on the latest Best Buy x Beats Studio commercial premiered on October 16th. As confirmed by the singer herself, there had a total of 3 promotional singles before the album’s release. The second official buzz singles “Venus” and “Dope” were released on iTunes on October 28 and November 4 respectively.

The song is pretty dope. No just dope, like the song “Dope“, you know. It’s a perfect 80s inspired electro-R&B/Soul track with a Caribbean groove reminds me to Drake’s latest hit single “Hold On, We’re Going Home“. The track uses / steals the sampler of classic track “Dance With the Dead” by The Deep (Listen). After surprising us with her most urban site in “Jewels N ‘Drugs“, now Gaga shows an exquisite “savoir-faire” with an elegant and sensual production co-written in collaboration with Robert Kelly, Martin Bresso and William Grigahcine. Show us the thong, again Germanotta silenced many mouths!

After the success in the charts, placing the song at number 1 on iTunes in 56 countries, Gaga confirmed that the song becomes the second official single from the album. The music video was filmed in early-November and it was directed by Terry Richardson. Currently the video is still not released.

During “Black Friday” on November 29th, Gaga and “ARTPOP” producer DJ White Shadow confirmed a new version of the song with the collaboration of American rapper Rick Ross. The new version tagged as “DJWS Remix” surfaced online on December 20th. The remix was released on iTunes (USA) later the same day.

The official solo version of the track under the name ‘Non R. Kelly Version‘ was released on iTunes (Spain) on April 7, 2014 and it was included on the compilation album Europa FM 2014.