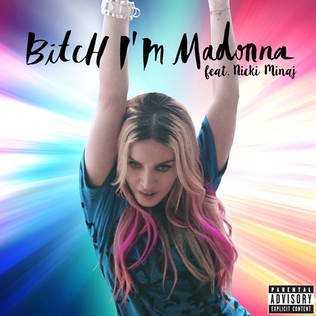 The next official single and follow-up to “Ghosttown“ is the funny and sick anthem “Bitch I’m Madonna“, one of the favorite songs of the multifaced artist.

“Bitch I’m Madonna” impacted radios in early June and arrives after the huge and controversial performance during The Tonight Show with Jimmy Fallon on April 9th.

The music video directed by Jonas Åkerlund, who also directed the video for “Ghosttown“, was filmed on the top of Standard Hotel in mid-May, and includes guest appearances of Nicki Minaj (of course), Diplo, Beyoncé, Rita Ora, Miley Cyrus, Katy Perry, Jeremy Scott, Chris Rock, Alexander Wang, Jon Kortajarena and her sons Rocco and David. It was premiered exclusively on TIDAL on June 17th and on Vevo the next day.

This is the third time Madonna and Minaj work together, the female rapper also collaborated in “Give Me All Your Luvin’“, first single of Madonna’s last album “MDNA” (2012), and another album’s track “I Don’t Give A“.

What do you think? For me, it’s a good summer single!