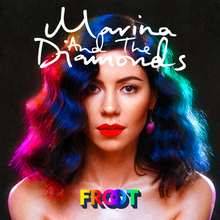 The world must be ready! British singer-songwriter Marina and the Diamonds is almost back to the music spotlight. Following the release of her Fashion brand 11 Diamonds, the singer is currently working so hard in the studio in the awaited follow-up to her acclaimed second studio album “Electra Heart“, released in 2012.

The expected third album called “Froot” is scheduled to be released on December 12, 2014 and for now, little or nothing is known about the project. Back in July, Diamantis shared a first preview of new track on her Instagram account, and the hype just started.

Another snippet of the album’s title track “Froot” was premiered on her Instagram page on August 31st. The song was confirmed as the lead single and it was released during Marina’s Birthday on October 10th.

“Froot” can mean multiple things but its mainly used to describe something cool.