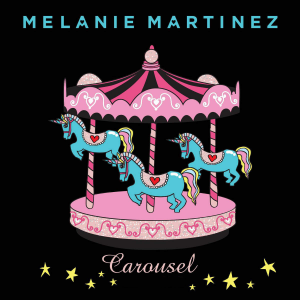 “Cry Baby” is the debut studio album by American singer-songwriter and The Voice contestant Melanie Martinez. It was released on 14 August 2015 via Atlantic and Warner/Chappel.

The album comes preceded by the release of her debut EP “Dollhouse” in 2014 including the official singles, EP’s title track “Dollhouse“, and “Carousel“.

The proper lead single from the album is the song “Pity Party“, released on June 2nd. The track “Soap” was released as second promotional single on iTunes on July 10th.

The singer revealed a snippet of the next official single “Sippy Cup“, which is set to be released on July 31st. The official music video directed by Martinez was premiered exclusively on SPIN on July 30th.

A music video for the album’s title track “Cry Baby” was premiered on March 14th. It was directed by Josh McKie. A video for “Alphabet Boy” directed by Melanie herself was debuted on June 2nd.

A mini film including the songs “Tag, You’re It” and “Milk and Cookies” was directed by Melanie Martinez along Josh McKie and it was premiered on August 23rd.