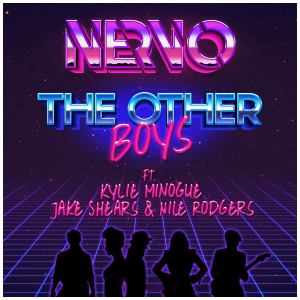 NERVO twins don’t rest a moment in the promotion of their highly-awaited debut studio album “Collateral“, scheduled to be released on 24 July 2015 via EMI Virgin Records.

Following the premiere of the music video for their new single “Hey Ricky” featuring Dev, Kreayshawn and Alisa, another big collaboration is coming to slay all your faves.

This time, the duo teams up with Scissor Scisters frontman Jake Shears, Goddess of pop Kylie Minogue, and disco music legent Nile Rodgers to release “The Other Boys“.

The song serves as the fifth overall single taken from the album and it’s scheduled to be released along the album on July 24th.

Mimi and Olivia filmed the music video with Shears, Minogue and Rodgers in late-March. It’s expected to be premiered on October 13th.

The song was officially premiered on NYLON on July 22nd. The music video was premiered in full on Wednesday October 28th.