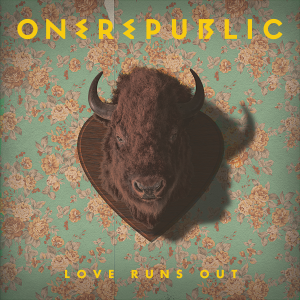 American band OneRepublic continues promoting its third studio album ‘Native‘, released on digital retailers March 22, 2013 via Mosley and Interscope Records. The lead vocalist and songwriter of the band Ryan Tedder confirmed that they plan to edit a new song and the world was so ready for that.

The track is officially called ‘Love Runs Out‘, it was planned as the first official single from the album but as the artist himself has said, he couldn’t figure out a good chorus for it, and finally the song was discarded and not included in the final album tracklist.

Near the first anniversary after the album’s release, the group confirmed that the song was ready to be released in its final version. ‘Love Runs Out‘ was co-written by Tedder, Brent Kutzle, Andrew Brown, Zach Filkins and Eddie Fisher and it was also included in the reissue / deluxe edition of the album.

It was officially released on digital retailers on April 14th. The music video was filmed in early May and it was directed by Sophie Muller. It was premiered on VEVO on Wednesday June 4th.