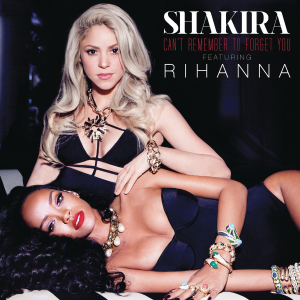 Stop the world right now #ShakiraIsBack! Colombian super star singer Shakira marked a date for her highly-awaited return to the music scene. After several delays finally it’s here! The new single was released on digital retailers on January 13, 2014. It’s officially called “Can’t Remember to Forget You“, and it has the guest vocals of Barbadian pop star Rihanna. This is too much!

The song was co-written by Shakira and Rihanna with the collaboration of John Hill, Tom Hull, Daniel Alexander Ledinsky and Swedish singer-songwriter Erik Hassle, known by his European smash single ‘Hurtful‘, released in 2008. The official video was recorded between 6 and 8 of December. Shakira confirmed that the video was directed by Joseph Kahn on Twitter. It was premiered on VEVO on January 30, 2014.

The track produced by Shakira, John Hill and Kid Harpoon is influenced by the Jamaican Rocksteady meets Ska, used on No Doubt’s latest studio album “Push and Shove“, released in 2012. Shakira moves away from the more commercial pop dance sound, and returns betting on a pop rock style, something closer to her beginnings in the music world.

“Can’t Remember to Forget You” is confirmed a the lead single from Shakira’s upcoming tenth self-titled studio album, ‘Shakira‘, scheduled to be released on digital retailers on March 25, 2014 via RCA and Sony Latin Iberica. The singer launched the Spanish version of the single entitled “Nunca me acuerdo de olvidarte“ on January 21.