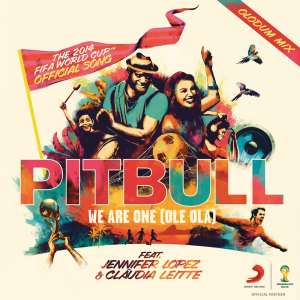 It is about one of the most important events of this year. The 2014 FIFA World Cup will be the 20th FIFA World Cup, and it’s scheduled to take place in Brazil from 12 June to 13 July 2014. Like every four years, various artists around the world use to launch songs to support their respective countries. But as always, only one is chosen as the official song of the sporting event.

Following the global success of ‘Waka Waka (This Time for Africa)‘, the official song of the last edition, performed by Colombian superstar Shakira. This year, they have a very high bar to overcome. The Fédération Internationale de Football Association (FIFA) has confirmed the name of the 2014 anthem ‘We Are One (Ole Ola)‘. The song is performed by American rapper Pitbull and whose international version has the guest vocals of Jennifer Lopez and Brazilian singer Claudia Leitte, who as you well know is a mentor on The Voice Brasil.

The was written by Lopez, Leitte and Pitbull with the collaboration of Sia Furler, Thomas Troelsen, Daniel Murcia and Nadir Khayat, who also produced It. ‘We Are One (Ole Ola)‘ was released on digital retailers on April 8, 2014 alongside the pre-order of the compilation ‘One Love, One Rhythm – The 2014 FIFA World Cup Official Album‘ and it promises to be one anthem that you are hooked from the first listen. The Pitbull solo version of the single was exclusively premiered on Brazilian radio Blink 102. Spanish singer Enrique Iglesias revealed that he sings the backing vocals on the song.

The music video teaser was exclusively premiered on Good Morning American and Despierta América on Monday May 12th. The video for the Olodum remix was premiered in full on VEVO on Friday May 16th.