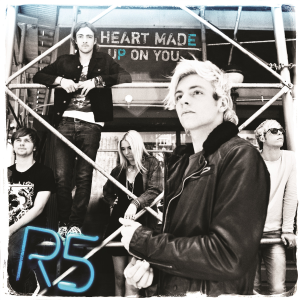 Following the release of its debut album “Louder” in 2013, American pop-rock band R5 is ready to start promoting some new music to delight all its fans.

The band confirmed the song “Heart Made Up On You” as the lead single taken from its upcoming third extended play, with the same title, released on July 29, 2014 via Hollywood Records.

The EP “Heart Made Up On You” serves as the first taste of the band second full length studio album, scheduled to be released early 2015.

“Heart Made Up On You” was premiered on July 21st. The official music video directed by Thom Glunt was debuted on VEVO on Tuesday August 5th.

The band premiered an alternate official “tour edition” video to promote the single on Septemebr 30th. This version was also directed by Glunt.

The band premiered a music video for the second promotional single “Things Are Looking Up” on VEVO on Thursday November 6th.