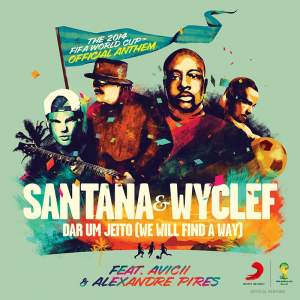 After the release of the official song ‘We Are One (Ole Ola)’ performed by Pitbull, the 2014 FIFA World Cup anthem is confirmed the track ‘Dar um jeito (We Will Find a Way)‘. The production is performed by Mexicam/American musician Carlos Santana and American hip-hop artist Wyclef Jean with the collaboration of Swedish producer Avicii and Brazilian singer Alexandre Pires.

The song is included on the upcoming compilation album ‘One Love, One Rhythm – The 2014 FIFA World Cup Official Album‘, scheduled to be released on digital retailers on May 13, 2014 via Sony Music Entertainment. The song was available on iTunes on April 29th.