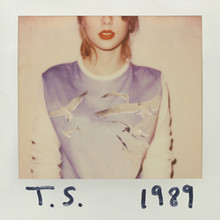 “1989” is the fifth studio album by American singer-songwriter Taylor Swift. It’s confirmed as her first ever POP album and it was released on digital retailers on October 27, 2014 via Big Machine Records.

It comes preceded by the lead single “Shake It Off“, premiered during the worldwide Live Stream on Yahoo! on August 18th.

The second promotional single is confirmed “Out of the Woods“ and it’s planned to be released alongside the pre-order of the album on iTunes on Monday October 13th.

The third promotional single is the album’s opening track “Welcome to New York“, produced by Ryan Tedder. It will be released alongside the pre-order of the album on iTunes on October 21th.

Before the release of the album, Target exclusively premiered a promotional video commercial including a snippet of new track “Style“, which was released as the third official single from the album.

The second official single was the track “Blank Space“, which impacted U.S. radios on November 10th. A special re-worked version of “Bad Blood” with the extra collaboration of Kendrick Lamar was released as the fourth single on May 17th.

The fifth single from the album was “Wildest Dreams”, which was released on August 31st. The previously released countdown single “Out of the Woods” is expected to be released as the sixt single early 2016.

Swift plans to debut a full concert of her acclaimed “The 1989 Tour” exclusively via Apple Music on December 20th.