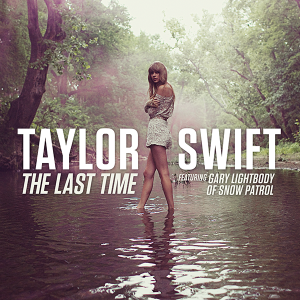 “The Last Time” is a song recorded by American singer-songwriter Taylor Swift. The track written in collaboration with Jacknife Lee has the guest vocals of Snow Patrol lead vocalist Gary Lightbody and it’s confirmed as the seventh single taken from her fourth studio album “Red“, released on digital retailers on October 22, 2013 via Big Machine Records.

It’s an alternative rock song and it’s planned to be released on iTunes (UK) on November 4th. The release of the single coincides with the announcement of the dates of her European tour, specifically, Taylor Swift announced the London dates for her RED Tour.

London’s The O2 will host Taylor Swift’s blockbuster THE RED TOUR on 1st, 2nd and 4th February 2014. Tickets will be priced from £37.50. Tickets will be available to purchase from 9am on Friday 4th October via AXS.com, ticketmaster.co.uk, gigsandtours.com and by phone on 08448 24 48 24. Exclusive VIP Experiences and packages are also available.

The music video was premiered on VEVO on November 15.