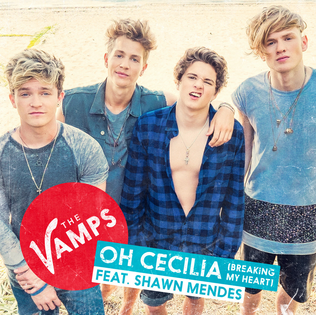 Following the release of its latest single “Somebody to You” with the guest collaboration of Demi Lovato, British pop band and one of the musical sensations of this year The Vamps is ready to start promoting the next one taken from its debut studio album “Meet The Vamps“, released on April 14th via Mercury, Virgin and Island Records.

The fifth official single from the album is the track “Oh Cecilia (Breaking My Heart)“, a special cover from the original recorded by American musician Paul Simon with the collaboration of Art Garfunkel and released in 1970.

The new version is scheduled to be released on iTunes (UK) in September. The music video will be recorded this week and it will be directed by Frank Borin.

The band performed an acoustic version of the new single exclusively on “On Air with Ryan Seacrest” on Friday July 18th.