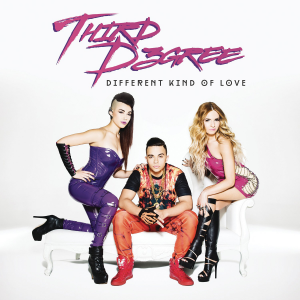 Third D3gree are an Australian three piece mixed pop-R&B group consisting of singers and dancers Vanessa ‘Kelebek’ Skrypczak, Jacinta Gulisano and Jordan Rodrigues. They were formed exclusively in 2013 for the fifth season of The X Factor Australia. Gulisano and Rodrigues contribute mainly vocals, with Skrypczak contributing both vocals and rap.

They finished fourth on the contestant and signed record deal with Sony Music Entertainment. As debut single they present the pop track “Different Kind of Love“. It was written and produced by Ben Berger and Ryan McMahon of Los Angeles duo Captain Cuts. It would have been Third Degree’s winner’s single for the fifth series of The X Factor, if they had won the show.

“Different Kind of Love” is a great pop/dance/rap track with a great potential to succeed in mainstream radio. Sounds like a mix between Flo Rida, Ke$ha and Karmin. The business side of music. Addictive and easy to hear, if you like pop, you’ll like the song from the first listen. It was released digitally on November 1st and it’s scheduled for release physically on 8 November.