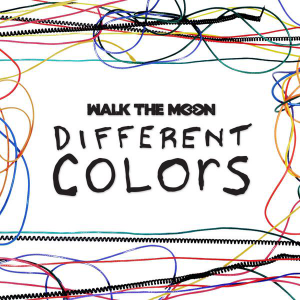 Following the huge success achieved with “Shut Up + Dance“ which reached number 8 in Billboard hot 100, American rock band WALK THE MOON is ready to bring back another bop with its upcoming second shot taken from the band’s second major album “Talking Is Hard“, released on 2 December 2014.

The next and second official single is the album’s opening track “Different Colors“, produced by Tim Pagnotta. It was initially released as instant download with the album’s pre-order on iTunes on 17 November.

The new single was written by Eli Maiman, Kevin Ray, Nicholas Petricca and Sean Waugaman and impacted alternative radio on 5 May.

The proper music video directed by Nathan Crooker and Patrick Nichols was premiered through Vevo on June 11th.