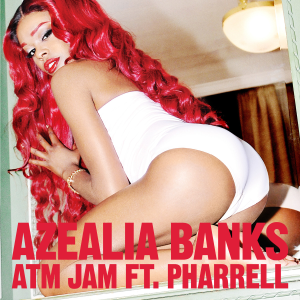 “ATM JAM” is a song recorded by American rapper and songwriter Azealia Banks. The track has the collaboration of American record producer, singer-songwriter and fashion designer Pharrell Williams, and it’s confirmed as the second official single taken from her highly-anticiapted debut studio album “Broke with Expensive Taste” that’s scheduled for release this fall in January 2014 via Interscope and Polydor Records.

The single is planned for release on digital retailers on 29 September. The singer previewed the track on her set at 2013 Glastonbury Music Festival on June 29. Hot 97 radio premiered the track on July 2. The full track was released on July 11. Banks recorded the official video with Pharrell in late-July and was directed by Rony Alwin. It was leaked online on October 19th and premiered on VEVO on October 21.