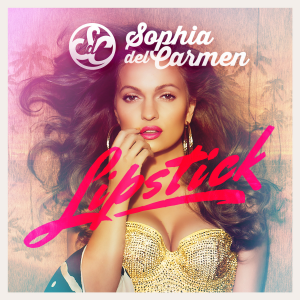 Guatemalan/Costa Rican singer-songwriter Sophia Del Carmen is finally back to the music scene with brand new single. Maybe you’ll remember Sophia as the RedOne’s protégé and one of the first ladies signed to his label 2101 Records.

She collaborated with Gabry Ponte’s latest single “Beat On My Drum” with Pitbull, released in 2012. She debuted in the music scene in 2010 with her first single “No te quiero” (English: ‘I Don’t Want You‘) also with the collaboration of Pitbull.

She returns with her major debut single entitled “Lipstick“, first official taste of her highly-awaited debut studio album, scheduled to be released in 2015. The song produced by RedOne was released on digital retailers on March 18, 2014.

Del Carmen re-released the track with the extra vocals of American rapper Pitbull on 27 May 2014. The official lyric video of this version was premiered on January 6, 2015.

The highly-expected music video for the original version of the song was finally premiered on 28 January 2015.